Are you curious about the most popular jazz instruments? Or perhaps you're attempting to jazz up your music?

Jazz music's evolution has a very fascinating past. This genre of music is a result of the yearning for self-expression mixed with traditional African sounds.

Everyone deserves to have a voice, and because African-Americans were and occasionally still are subjected to severe oppression, thoughts were suppressed.

Music provided additional channels for the vocalization of ideas. A few very different instruments were used to artistically combine the traditional sounds imported from the African continent, and the name "jazz" was created to characterize the result.

The most popular jazz instruments are shown in the following images and explanations, enjoy!

Invention of trumpets dates around 1500 BC. The device served as a combat trumpet during that time. It later evolved into a musical instrument in the 14th and 15th centuries.

The lovely trumpet is the jazz band's highest-pitched instrument. When performed by a skilled performer, the tonal quality is extremely crisp and clear. A jazz band can portray a composition with either a very quick speed or with sluggish, drawn-out sounds.

The trumpet is arguably the instrument most closely linked with jazz, in part because Louis Armstrong, a jazz legend, played it.

Jazz music first used these incredible drums in the early 1900s, and their main function was to keep time. The music's tone or mood might also be changed by using the drums.

Jazz drum sets often only include a few components, despite the fact that they can comprise a wide variety of percussion instruments.

In contrast to other types of music, drums are performed differently in jazz. In addition to keeping the beat, drummers had to be flexible. According to legend, one of the first drummers to master the drums in this brand-new genre was Sid Catlett.

The guitar is the most frequently utilized instrument in all musical genres and is particularly well-liked in jazz. Guitars make it possible for musicians to play hundreds, if not thousands, of different notes, making them one of the most adaptable tools in the whole world.

For its clarity, jumbo or hollow-body guitars are employed in jazz. Electric guitars are more frequently used by jazz artists to play either solos or rhythm.

The clarinet has been a component of jazz from its origin, just as the trumpet and piano are. This instrument was widely used in swing and New Orleans jazz in the 1930s and 1940s.

It is thought that Johann Christoph Denner invented the clarinet. It was created in Germany in the 1700s, and later technical advancements were made to it to increase the intonation and usability.

Jazz nowadays does not include the clarinet as often, but when it does, its warm, round tone draws special attention. The tone of the clarinet, a member of the woodwind family, is created when the reed on the mouthpiece vibrates.

Sydney Bechet, the first jazz soloist, and Johnny Dodds, who began playing the clarinet at age 17 and was trained by Louis Armstrong and Joe "the King" Oliver, are two of the most well-known clarinet players.

One of the jazz rhythm section's most adaptable instruments is the piano. It can virtually produce the sound of a complete band by itself because of the range and variety of its abilities, and this is the reason why it’s one of the most important jazz instruments.

This instrument's 88 keys provide for a wide range of harmonic possibilities and the ability to play both extremely low and very high notes. The piano may be used as a percussive instrument, or it can be played softly and melodically.

The saxophone is a woodwind instrument, although it is composed of brass. By blowing into the mouthpiece, a cane reed vibrates to produce the instrument's tone.

The saxophone can only play one note at a time since it is a monophonic instrument. This indicates that its function is often to solo as well as play the melody, or "the head," of a song.

Famous saxophonists include Coleman Hawkins and Lester Young, known as "The Fathers of Jazz Saxophone," who created the jazz music's softer, smoother tones.

Brass is used to make trombones. It makes use of a movable pipe that enters and exits the instrument's front end. Different notes may be produced by moving the slide pipe around.

Tenor trombones are typically used as jazz instruments because they produce the liveliest sound and are the most practical for performing the wide ranges frequently employed in jazz music.

Early on in the jazz era, trombones were utilized mostly as a background instrument, but during the swing era of jazz in the 1930s, they took center stage as a solo instrument.

Some of the slower tempo notes that are generally associated with jazz music are produced by the mellow double bass. This instrument may be played quickly with a thump-thumping motion to produce an upbeat melody or traditionally slowly to produce a gloomy and bluesy jazz piece.

In jazz bands, the double bass instrument first appeared in the 1890s. Ray Brown, who was married to Ella Fitzgerald, and Charles Mingus are two well-known bassists.

Experimenting with musical instruments is not prohibited. Therefore, even if you lack the jazz instruments mentioned in this article, you may always try to experiment with other musical styles with the instruments you do have.

Please visit our blog area to read more posts about the music world if you enjoyed this one. 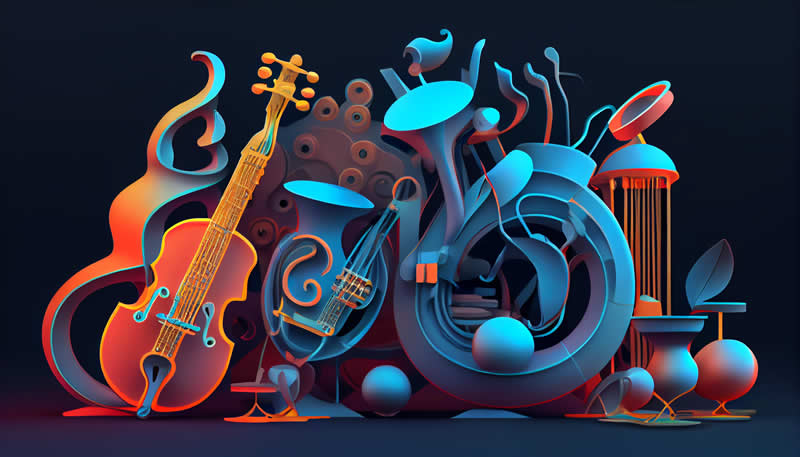